TRAP THAT DOES NOT KILL MOUSE [EN]

marram in #education • 2 years ago

Good morning everyone, as always I thank you for being here and seeing another of my random posts, this time to tell you one of the little things that happened during the strict quarantine of my city, and it was that a mouse has entered my house and I am truly in favor of protecting life whenever possible.

Usually I go to sleep much later than my parents, they go to sleep around 11 pm and I at 1 or 2 am, so at dawn everything is very quiet for me and since the apartment where we live is small , I can perceive any noise and it was very strange to hear for two nights in a row noises of bags in the kitchen, I assumed there was a mouse and it was doing its thing in the garbage bag, which I confirmed the third night I left a bread on the table and it has dawned bitten, again I left the same bread in the same place the following night and indeed it returned to eat from it, this has an objective that I will explain later.

I repeat that I prefer to defend the lives of animals and / or people as far as possible, and this was not going to be the exception, luckily in my house we do not have spring mouse traps since a case of these is very rare, So, using my craftsmanship skills, I improvised a trap with things that I had on hand at home, such as thread, ribbon, a wire and a small bucket (or platter, it still works). 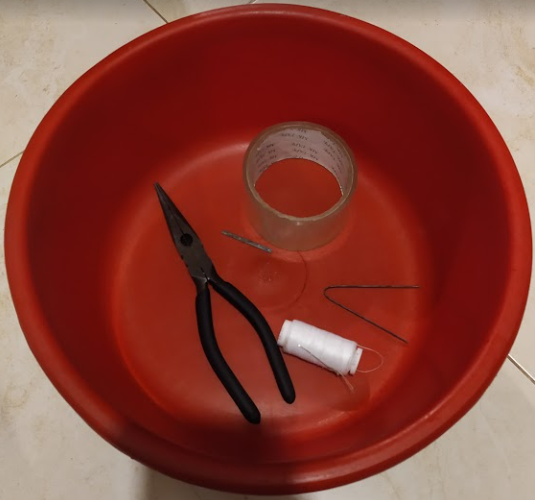 Materials, I only used the pliers to bend the wire

My idea was to put together a small system that would make the drum fall on the mouse, putting the wire (bent in V with the tweezers so that it does not fall in the wrong direction) on one side, tied with a thread in such a way that at the apply a small force on the wire and the wire will fall next to the drum. It is better than on thread and not missing, at this point I have not cut it

Since it was not an option to damage the small container, I have tied a wire to it so that it would be easier to stick it with adhesive tape to a central part of the wall of the container and the other end of the thread to the lower part of the V-bent wire. 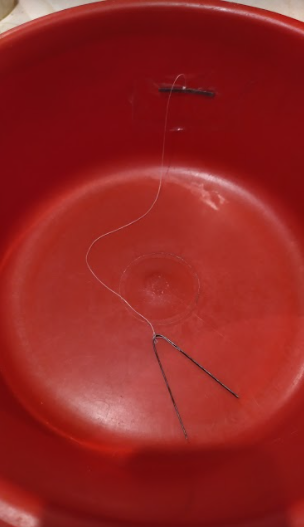 In the photo it is not well appreciated, but the thread is a bit long, the excess is wound on the same wire to adjust its length

And it is time to put the bait, tied to the wire in a central part of it (so that the force is better directed to the wire) I have put a piece of chicken skin a little toasted to enhance its aroma (trick that my Dad and my grandfather in turn to him). The line should be taut, and the bait hanging, it is a little late to adjust the length of the line, but it is necessary to ensure its operation

Finally it was time to assemble everything, at night I have placed the trap in the same place that the mouse had eaten bread twice in a row and it was likely that it would return that night to the same place, all animals (including us) are beings of habit and this logic works both in the field and here (in the field we can see that the same animals almost always take the same routes and even at similar times), these usual points are the perfect ones to set traps and it is a useful fact that even for survival it works.

The trap is simple, put the wire holding a part of the bucket as far as the point where the other end of the wire is attached, with the bait in the middle and spreading a few knots around it so that it gets closer. Ideally, the wire should be in a position that is easy to knock down with any movement of the wire, it is easy to adjust by looping the wire on the wire. 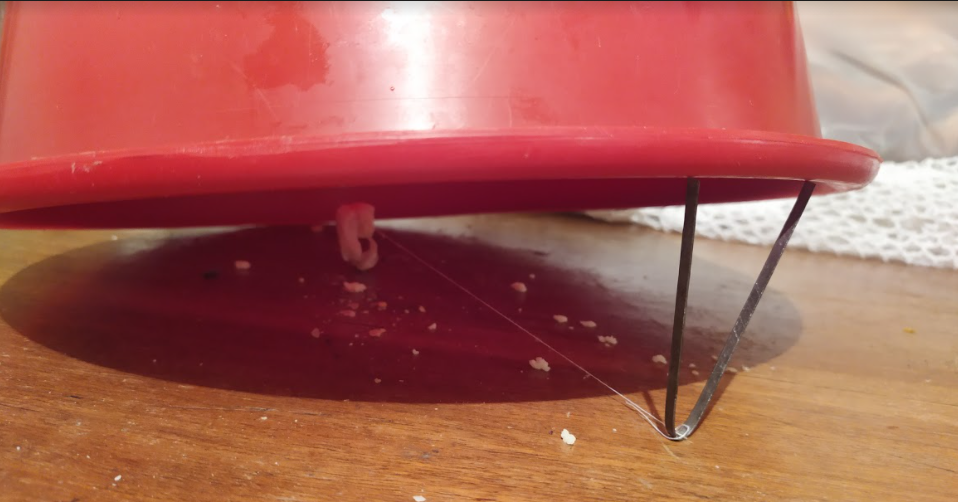 It is important that the height allows the passage of the mouse and the trigger of the trap quite sensitive, I had to mount it several times to make sure it worked, it must also be tested in the place where the trap will definitely be since the wire does not slip from it form in other types of soils

The plan and the trap worked perfectly, around 1 am I heard the bin fall in the kitchen, even my parents woke up and we went to look, indeed there was a mouse inside, but it was not a small mouse as we thought but it was a large mouse and only its body was about 20 cm, not to mention its tail, luckily when the bin fell we went quickly to check or else because of its size I could have pushed the bin to throw it off the table, it also helped that the mouse was scared and went completely still I guess because of his instincts to stay hidden. As a future recommendation, hold the trap or put extra weight on it to avoid this.

Finally we took a thin board and carefully slid it under the bin (my fault, we had to put it from the beginning, luckily it did not affect the result), we lifted the board with everything and bin, went down the stairs, went out to the street and We walked to a park 3 blocks from our house (yes, at 1 am), where we carefully lifted the bin and the mouse ran away, that's when we realized its real size.

The trap was simple, with household materials that were not damaged (of course I had to wash them well), but it fulfilled its objective which was to get the mouse out of the house without hurting it.

I hope this information will help you if you are in a similar situation, please do not kill the animals if possible, they also strive every day to survive and also have their own young that need to eat. I know that they are a plague for us, but many times they live in places that do not even affect us directly such as sewers or holes and only venture into the houses when they have no other option, I also know that they are a source of diseases and infections, but they rarely interact with humans, they also fear us and attack us when we attack them, they just want to defend themselves and live. If we want to prevent them from entering our houses, we simply avoid leaving food watered and the holes that lead to the outside try to cover them at night. In our case it was that in another apartment in the same building they were very dirty, spreading food without cleaning it and that probably attracted him.

Thank you very much for reading this far and remember to protect the lives of the animals, only as a last resort choose to take measures that hurt them. Remember that @Marram wants to see you all very healthy.

Congratulations @marram! You have completed the following achievement on the Hive blockchain and have been rewarded with new badge(s) :